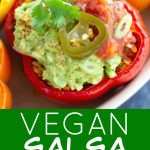 These vegan stuffed peppers are filled with delicious chunks of seasoned shredded jackfruit, your favorite salsa, and vibrant yellow rice! This easy to make gluten-free meal is ready in just one hour and it’s sure to be your new favorite family-friendly meatless dinner! 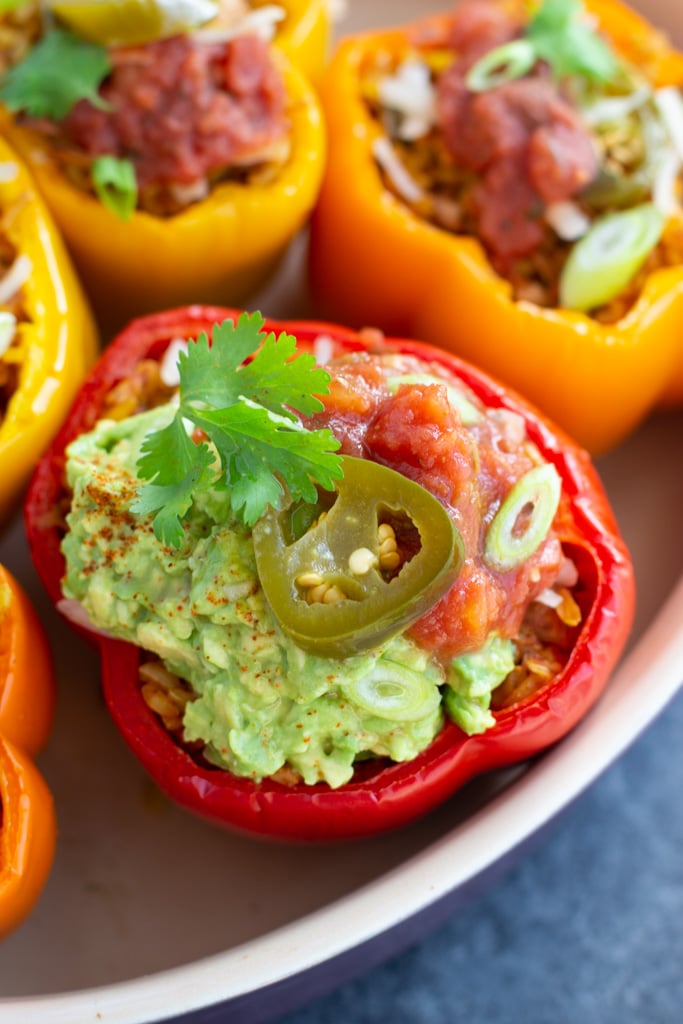 Before I was vegan, one of my go-to easy dinner recipes was to cook chicken breasts in a slow cooker with a jar of salsa. Then I would shred the chicken and mix it with the salsa and it would make it taste so flavorful! I would use the shredded chicken as a filling mixed with yellow rice for stuffed peppers, tacos, or enchiladas. Using store-bought salsa is such a quick and easy shortcut that adds so much flavor.

Now that I’m vegan, I make the same recipe, but I use shredded jackfruit instead of chicken. Jackfruit is the perfect replacement for chicken because it shreds perfectly and it tastes delicious! This meatless meal is super easy to make, customizable, and it’s ready in just one hour!

How To Make Yellow Rice Without Saffron

I love yellow rice in these easy vegan stuffed peppers, but I don’t make it with saffron because it’s so expensive and I don’t want to use a box mix. The easiest way to make beautiful yellow rice at home without breaking to the bank is to add 1/2 tsp of turmeric powder to the water that you cook the rice in. While the rice is cooking it will absorb the turmeric powder and it will color the rice a beautiful and vibrant shade of yellow!

How To Make Vegan Stuffed Peppers

Begin by cooking the yellow rice in a separate pot. Set it aside when it’s done. While the rice is cooking, put the rinsed and drained jackfruit into a large pan along with water (the water will help to steam and soften the jackfruit) and all of the dry seasonings. 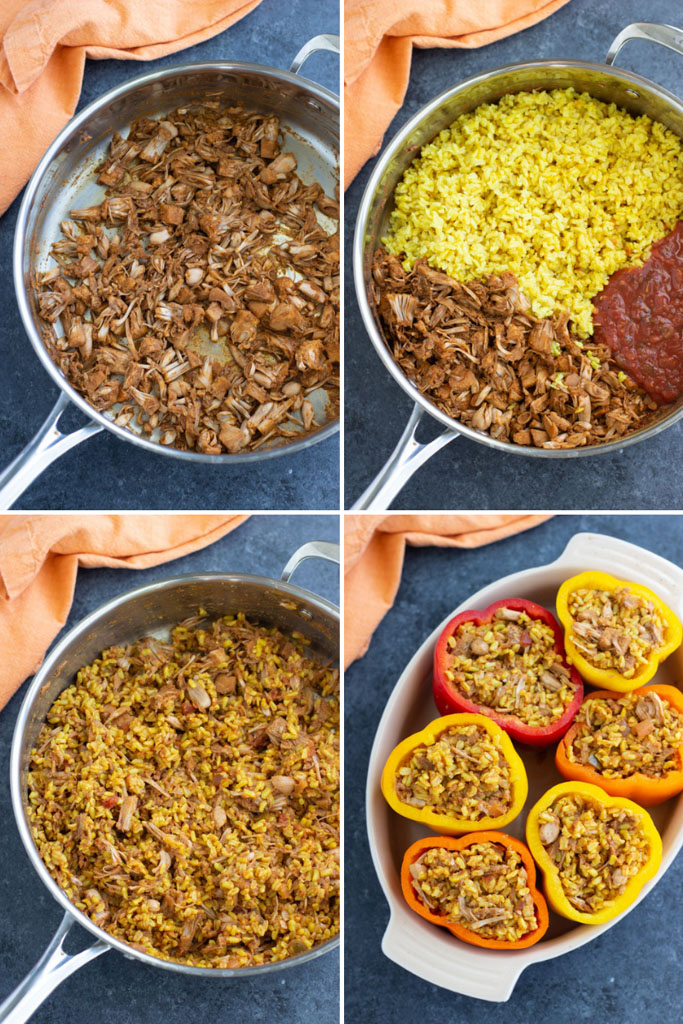 Next, cover the jackfruit and let it cook for 20 minutes or until the jackfruit is soft enough to lightly smash and break up the chunks with a spatula or potato masher. While the jackfruit is cooking, slice the tops off the bell peppers and remove the seeds and membranes. 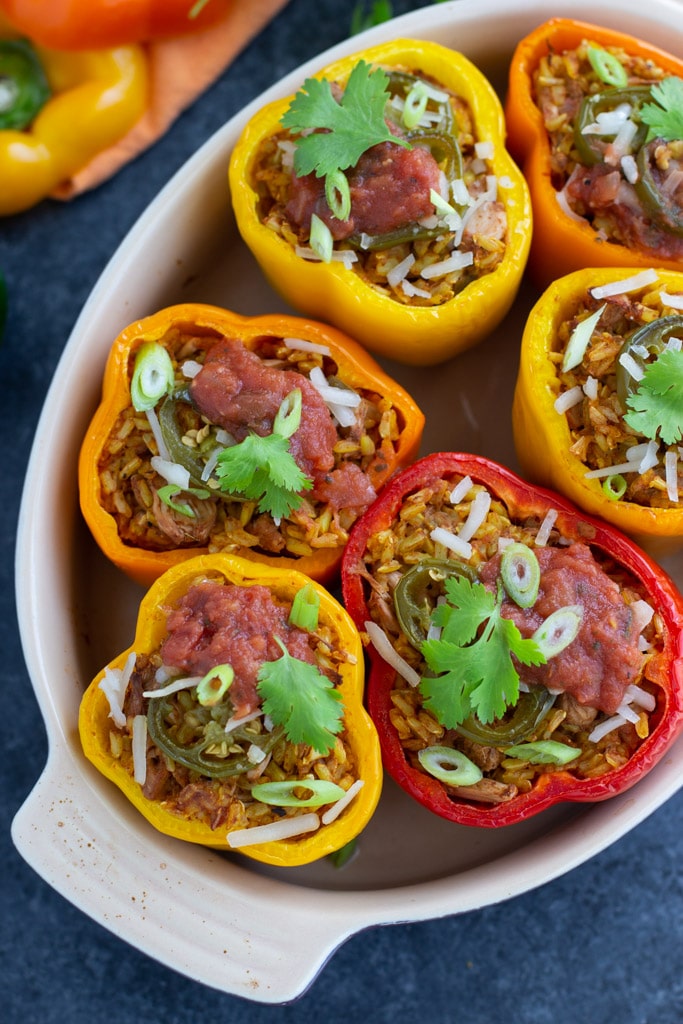 Store the vegan stuffed bell peppers in an airtight container in the fridge for 3-5 days. Learn more about storing bell peppers, here.

Can You Freeze Vegan Stuffed Peppers?

Yes, you can freeze the vegan stuffed peppers. I recommend arranging the peppers in a freezer-safe container and then freezing them after you stuff them but before you bake them. When you’re ready to reheat the peppers, take them out of the freezer and let the peppers defrost for 24 hours in the fridge overnight. Bake the peppers at 350 degrees for 30 minutes or until they’re hot all the way through. Find more You can find more freezing options, here.

These homemade vegan stuffed bell peppers are delicious as-is but you can also try these tasty variations: 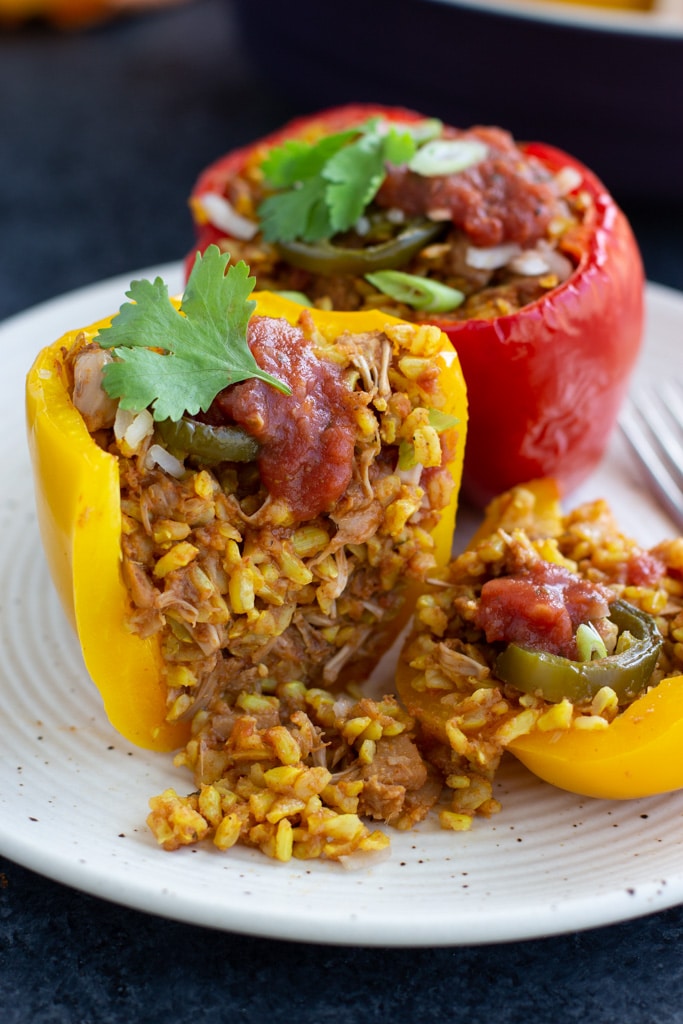 What Can I Do With Lots of Bell Peppers?

Do you have a bunch of peppers that you need to use up? Here are a few more delicious vegan bell pepper recipes that you should try! 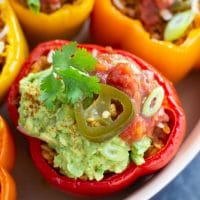 *This recipe was originally posted on 6/23/15 but I updated it with new pictures and better recipe instructions on 6/5/20. 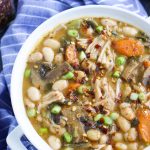 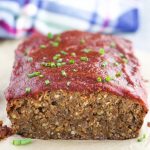 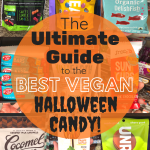 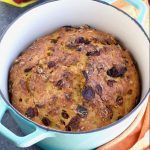 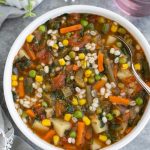 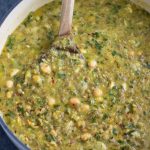