Home » Disney » How to Ride Avatar Flight of Passage Before the Park Opens! 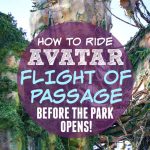 Learn how to ride Avatar Flight of Passage before the park officially opens without having a fast pass, extra magic hours, or an early breakfast reservation! I'm also sharing how to ride both Pandora rides within 30 minutes of the park being open + a schedule to go on all of the rides at the Animal Kingdom before 2 PM! 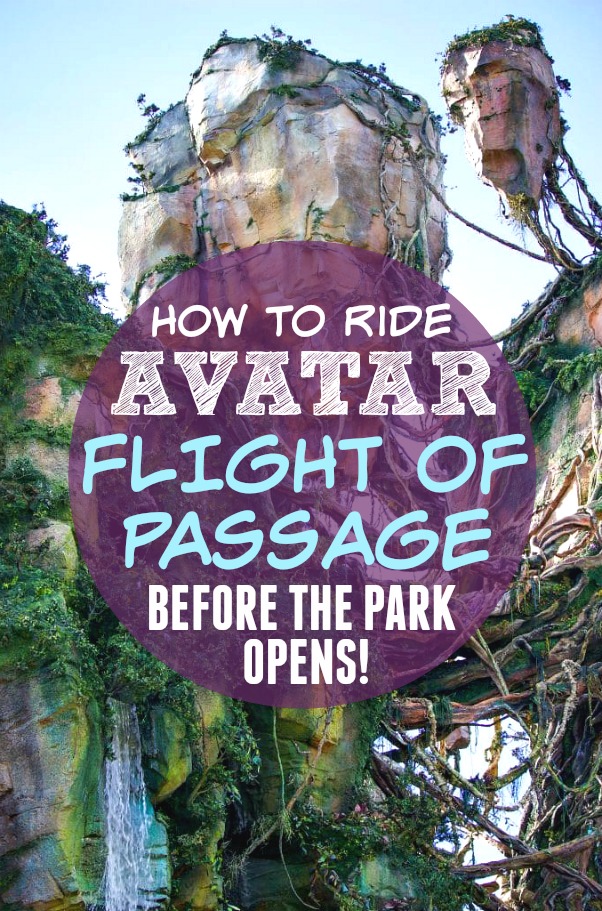 Flight of Passage is one of the best rides at Walt Disney World, it's truly spectacular! I'm never able to get fast passes for it (it's practically impossible!) and I refuse to wait in the ride queue for two+ hours while I could be going on other rides. We also tried waiting until the end of the night but that wait time was always really long too. After not being able to experience it for over a year, we decided to try another way to ride it.

A big thank you to Serena who runs the Instagram account, LivingByDisney, for teaching us how to get on Flight of Passage before the park opens! Make sure you check out her account for more Disney World park tips!

This guide will show you how to ride Flight of Passage before the park officially opens or how to ride both rides in Pandora within 30 minutes of the park being open! In addition, it will also tell you which three fast passes you should book in advance + how to schedule in the rest of the rides in order to ride all of the most popular rides in the park by 2 PM!

List of the Most Popular Rides at Animal Kingdom:

This whole theory and ride schedule is based on starting the day off with riding Flight of Passage and Na Vi River Journey so let's discuss both rides and make sure you want to ride them.

What Kind of Ride is Avatar Flight of Passage?

Flight of passage is a realistic 3D flying augmented reality simulator experience where you connect with your avatar and fly on the back of a banshee above the visually breathtaking landscape of Pandora!

Is Avatar Flight of Passage a Roller Coaster?

No, the Avatar Flight of Passage ride is not a roller coaster but it's definitely a thrill ride that makes you feel like you're flying pretty fast during the ride. I would say it's like Soarin (the ride at Epcot) on steroids!

Is Avatar Flight of Passage Scary?

There are some parts of the ride (fighting another banshee and simulated drops) that are a little intense but I wouldn't say that it's scary. If you tend to get motion sick easily (like me) you can always close your eyes during the intense moments and it definitely helps that they blow air on you during the ride!

There are a couple of moments during the ride while your banshee is flying that it will soar and dive so it feels like you are too. You're strapped into Avatar Flight of Passage ride vehicle seat so it feels like you're dropping too but if you close your eyes it won't feel so intense. In reality, your seat isn't really moving like that it just feels like it is because of the images you're watching. 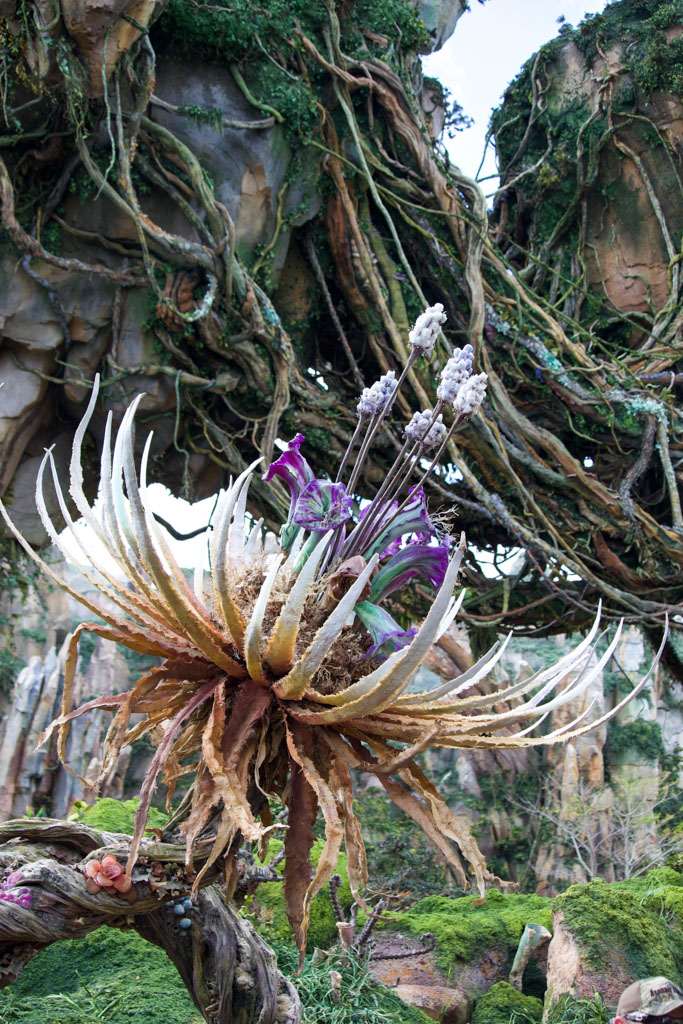 What Kind of Ride is Na'Vi River Journey?

Na Vi River Journey is a 4 ½ minute dark boat ride that winds its way through the beautiful caves and bioluminescent rainforest of Pandora! The ride is very calm and it's perfect for a break from the heat and sun. It's especially great for kids because there's no height requirement!

Does Na'Vi River Journey Have a Drop?

No, the Na Vi River journey ride doesn't have a drop, it's a very smooth, slow, and relaxing ride. It's not very thrilling but the layout of the winding glowing bioluminescent rainforest more then makes up for the lack of thrill.

Is Na'Vi River Journey Inside or Outside?

The Na Vi River Journey ride is all located inside. It doesn't go outside into the Pandora world.

No, you won't get wet on the Navi River Journey. There are no drops and it's not fast enough to cause any splashes or waves. You definitely don't need a poncho.

Now that we've gone over both Pandora rides, let's talk about how you can ride the Pandora Flight of Passage before the park officially opens or experience both rides without having fast passes and within the first 30 minutes of the Animal Kingdom being open!

Of course, if you are one of the lucky few who can get the elusive Pandora fast passes then book em' and run! If you're like me, a person who can't seem to book fast passes for Flight of passage to save her life then this is exactly what you should do to get yourself on the ride!

To walk right on to Flight of Passage before the park opens you'll need to be at Animal Kingdom for rope drop!

While planning your Disney World trip, you'll probably check the park hours and see that Animal Kingdom opens at 9 AM. So you plan to arrive in the parking lot or by bus at 8:45 AM and arrive at the front gate by 8:55 AM. That sounds reasonable, right? However, you walk up to the gate and see that it's already open and people are already in the park before 9 AM! What the heck!?

That's right, the park officially opens at 9 AM but the front gate rope drop happens between 8:05 AM - 8:20 AM. (Of course, the time could change but that's been my experience!) Most people who arrive at the park for Animal Kingdom are there so they can be first in line to ride Avatar Flight of Passage without any wait. 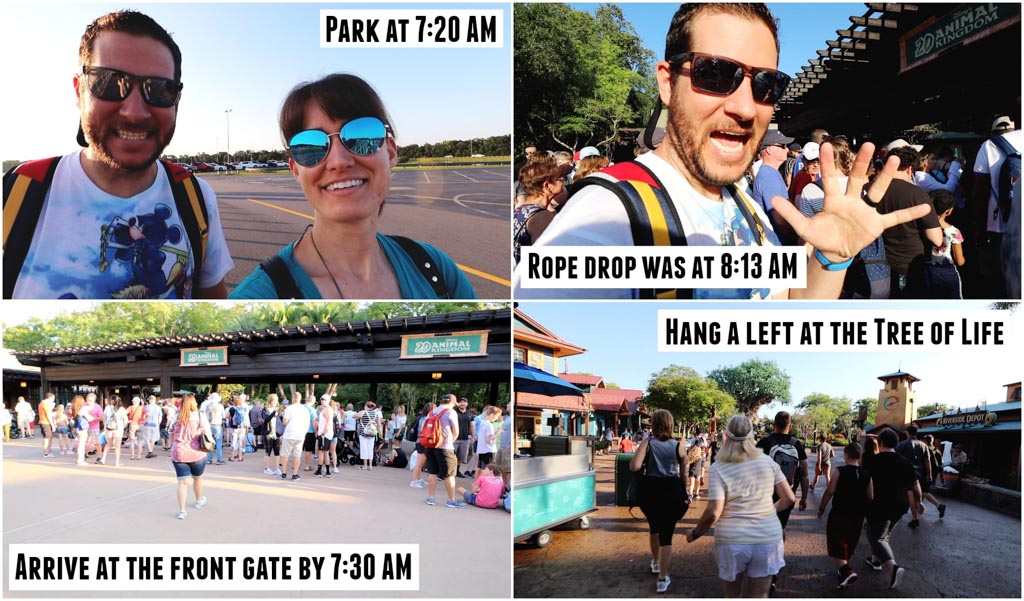 This is exactly what you should do to ride Avatar Flight of Passage before the park opens or to ride both rides in Pandora within 30 minutes of the park opening. 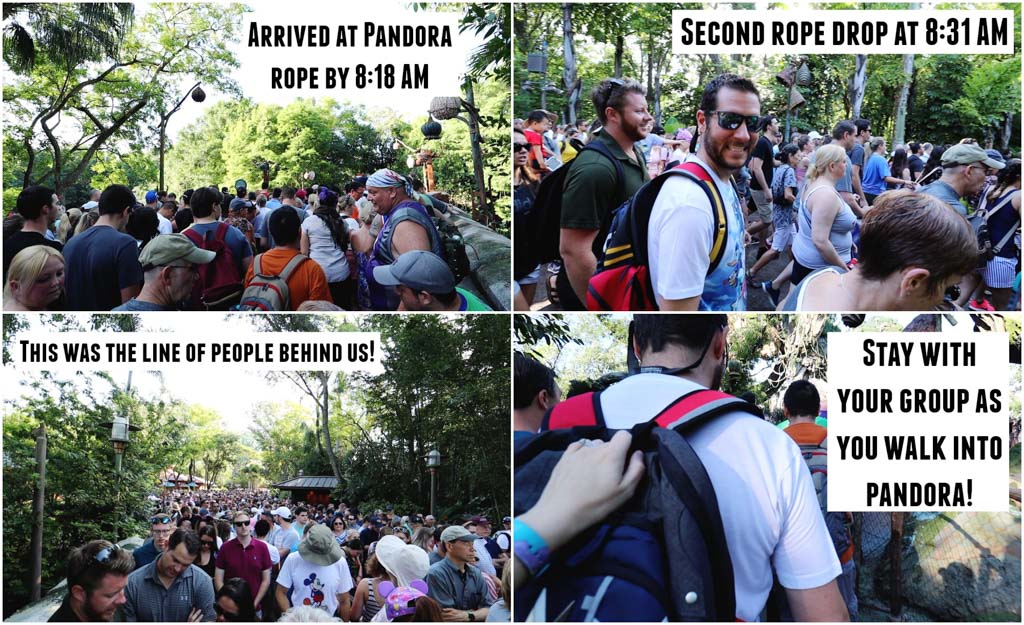 What Should You Do After Flight of Passage?

We entered the AFoP queue at 8:43 AM, walked into the passage theater by 8:47 AM, got on the ride at 8:50 AM, and were done and walking towards Na Vi River Journey by 9:04 AM.  That's what I would recommend you to do also. We only had to wait for less than 10 minutes in the queue to get on the Na Vi River Journey and it's a very quick ride so you *should* be able to complete both Pandora rides by 9:30 AM which is only 30 minutes after the park officially opens! 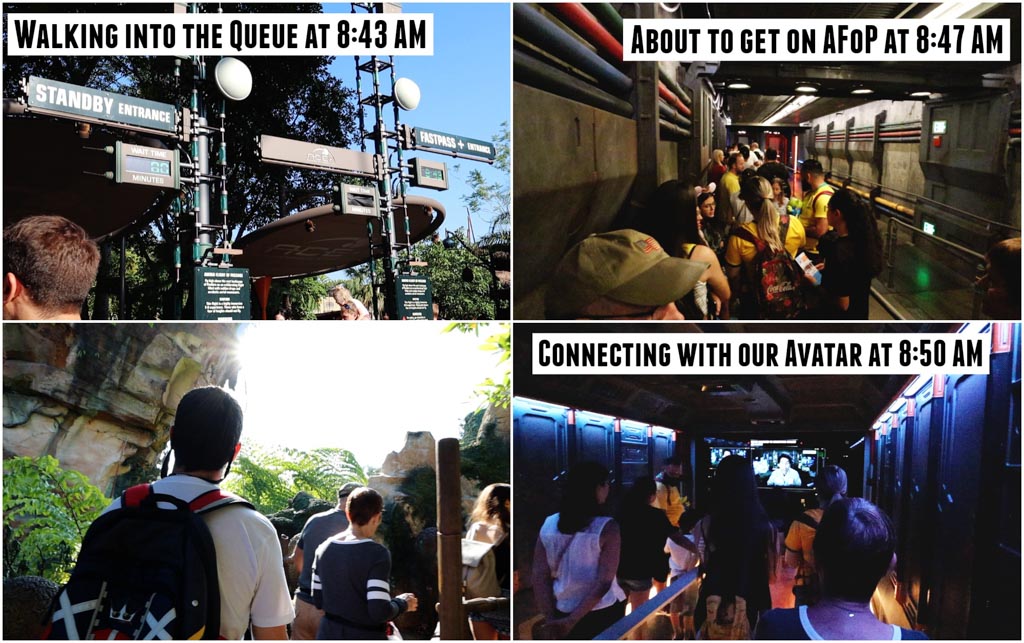 What Fast Passes Should I get For Animal Kingdom?

If you are able to get a Na Vi River Journey or Avatar Flight of Passage fast pass then thank your lucky stars! If you can't get it then I would highly recommend getting to Animal Kingdom at rope drop so you can knock out these rides first.

I would recommend getting fast passes in advance for:

Try to schedule these fast passes for between 10 AM-2 PM to maximize your time in the park and knock out as many popular rides as possible.

The rides with the shortest wait times that I wouldn't waste a fast pass on:

I don't consider the shows or character meet and greets to be a ride but they do offer fast passes for them. I wouldn't waste a fast pass on any of the shows either because it's not necessary to get a good seat.

Animal Kingdom does their fast passes in tiers. That means that you can book three fast passes in advance but only one can be a Tier 1 fast pass (Only one of the Pandora rides) and the other two have to be a Tier 2 fast pass.

As soon as you scan your band for the third ride that you used a fast pass for you can book a 4th and a 5th fast pass on the app if you'd like. There might not be much less but you never know what will pop up! It doesn't hurt to check!

If I could create the perfect ride schedule this would be it!

What Time Will You Be Done?

If the park officially opens at 9 AM (it could open earlier) and you get to Animal Kingdom at 7:30 AM for rope drop then you should be able to:

If you follow the ride schedule then you should be able to ride all of the rides at Animal Kingdom by 2 PM. Depending on how busy the park is you might finish a little bit earlier or a little bit later.

I hope this guide helps you to plan your day at Animal Kingdom! If you complete the challenge, make sure you take a victory picture like my husband did below! 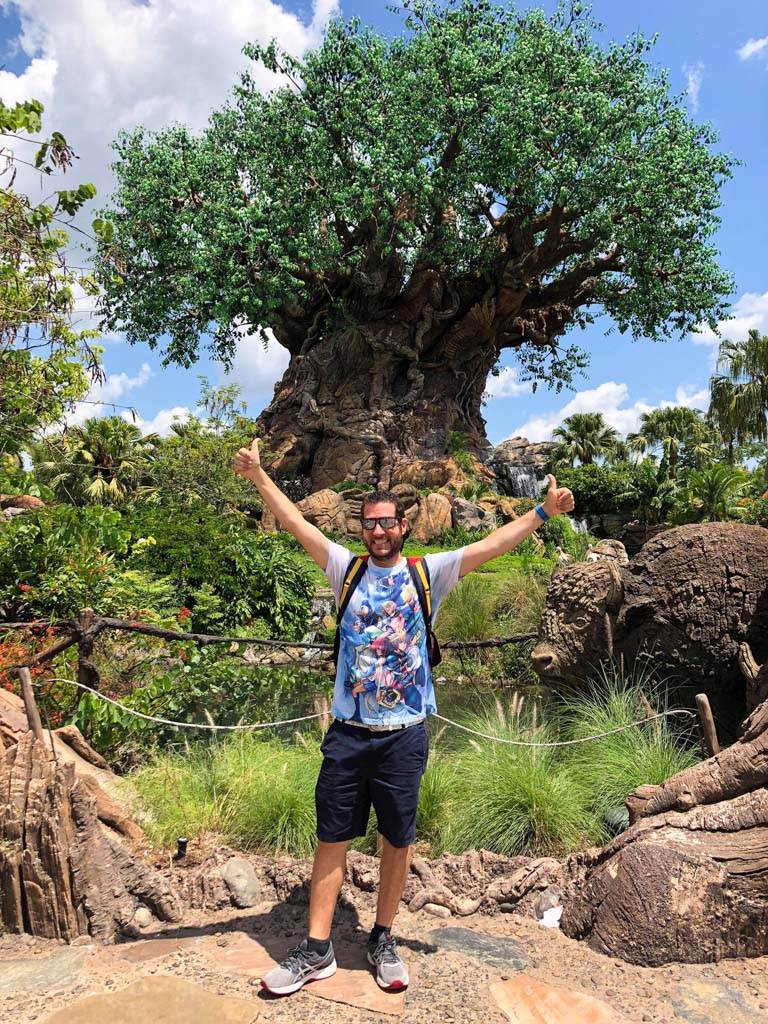 Guide to Eating Vegan on a Disney Cruise

Epcot Party for the Senses Review

5 Activities You Don't Want to Miss at MVMCP! 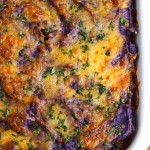 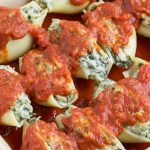 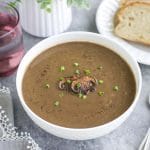 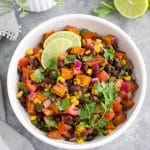 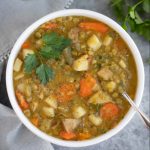 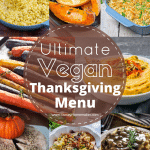